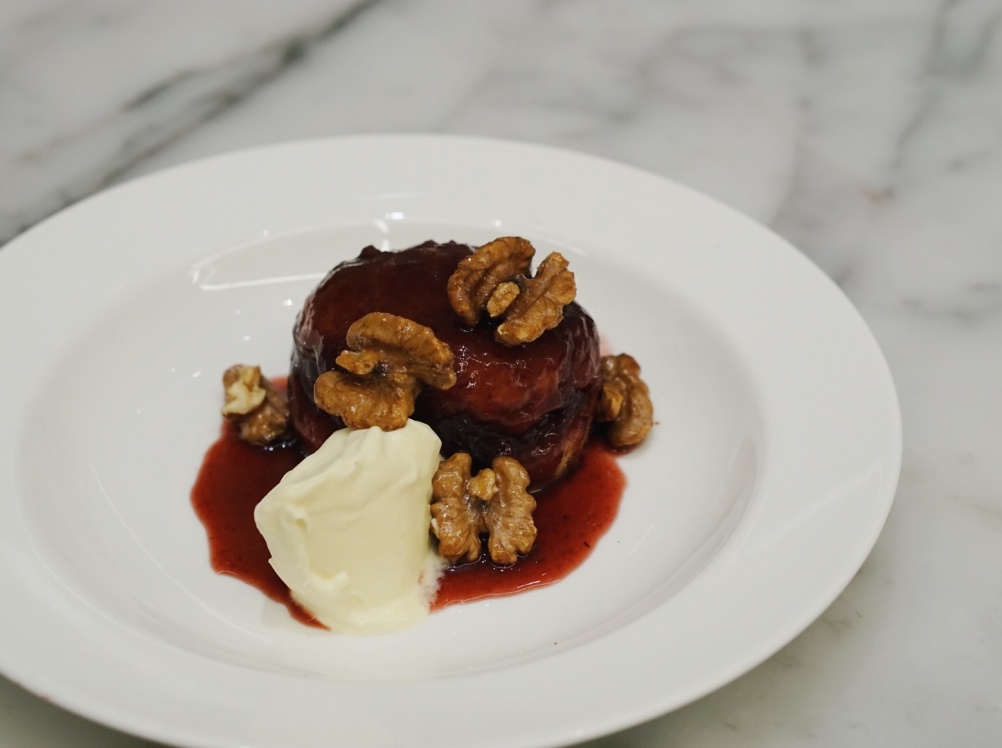 This year was the first time we bought a chest freezer for the kitchen. During the summer months we have an abundance of soft fruit from Fern Verrow and have found that if we put some in he freezer as soon as it has been picked (it never sees the fridge) we can capture some beautiful summer flavours that we can draw upon during the cold and bleak winter months.

Don’t worry if you can’t find damsons though – you can substitute with a tablespoon or so of bitter orange marmalade.

Start by placing the damsons and 180gs of sugar into a heavy saucepan. Place over a gentle heat and cook stirring occasionally until the sugar has dissolved and the damson have begun to pop from their skins. Turn up the heat to medium and cook until the damsons are really soft and have taken on a beautiful glossy darkness in colour. Remove from the heat and allow to cool slightly before passing the damsons through a sieve – discard the stones and reserve the puree.

Pre heat the oven to 180 degrees (gas mark 4). Butter 4 x dariole moulds or small individual pudding basins and set aside. Cream the softened butter and sugar together until pale and smooth. Add the eggs one at a time beating well after each addition. Sift the flour from a good height and fold in gently. Finally add the lemon zest, the strained finely chopped stem ginger and a little pinch of salt. Stir gently and well to combine.

Place a tablespoon of golden syrup in each mould plus a generous tablespoon of damson puree. Spoon the pudding mixture on top (the mixture will rise quite a lot during the cooking so be careful not to over fill). Cover each mould loosely with butter parchment paper. Place on  tray and bake in the oven for 30 minutes until risen and cooked through.

Remove from the oven and allow to cool slightly then invert onto a plate. Spoon a little remaining warmed damson sauce and place a generous dollop of jersey cream alongside.